Sunday September 17, 2017 was a bike trip over the Highwood Pass on Highway 40 through Kananaskis Country in Alberta from Longview back to Airdrie. It might be the last trip of this kind for the season. The Highwood Pass is supposedly the highest paved road in Canada. The forecast was a high of 17C and It was definitely chillier at the summit. I had to throw another coat on and switch to my winter gloves. There were signs of a recent snowfall which makes me think the next bike should have heated handlebars and a heated seat.

Five other bikers joined me. One I had never met before. Three of them had never joined me on a ride. Everyone got along well and everyone had a good time. If fall was not rapidly approaching I would try to get a group together again. The photo is at the top of the summit and somehow in a crammed parking lot with people all around I managed to get a photo with no one in it. Vehicles were parked along both sides of the highway near the entrance to the parking lot. I am not the only one trying to cram some more activity in before the snow hits. 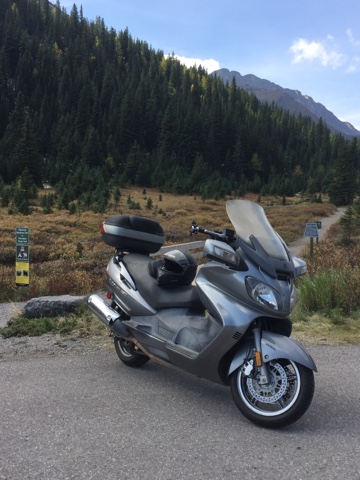