“Originally the name of the post office named after the first postmaster, Hugh Benyon Biggs. He was born in India, received his education in England, and came to Canada in 1892. Biggs, together with some friends, took up squatters’ rights to some land of which he later assumed ownership on Rosebud Creek. He called his holding Springfield Ranch and it became the scene of many social events of the area. When the railroad came through, the siding was named Benyon. He died in 1914.”

The area started as a ranch in about 1901. When a rail line came through in 1912 a general store, blacksmith shop, post office, grain elevators, and school followed. Apparently it was a layover spot for rail crews as well. Over time other places grew and Benyon did not. People and buildings disappeared through time or were removed until it became what it is now. A few residents live near the area. The area is now a permanently protected ecological preserve via a land donation of the founding family.

I drove through February 22, 2015. There are “No Trespassing” signs posted and warnings that there are patrols. Therefore I did not do much in the way of exploring. What little remains of the town is in a narrow valley. There are a couple of original buildings, an old rail line with no tracks, the remains of a pedestrian suspension bridge. There are no grain elevators. It is one of those “hidden” places, only a little over eight miles south of a main highway down a gravel road, then down a sharp little hill. The place almost sneaks up on you. It might have been interesting to see it when it was a functioning town.

According to Wikipedia the cemetery scene in the 1978 Superman movie was shot in the Benyon canyon. 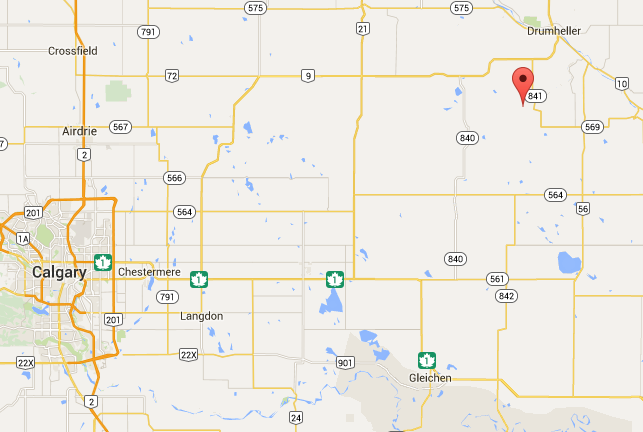