I live just north of Calgary, Alberta. Anyone who has spent anytime reading this site knows that I like to get out and explore rural Alberta when I can. I have lived in this province for a large chunk of my life and one day a few years ago I realized that I have not really seen much of it. So I decided to change that.

I think people really do not know how truly empty large parts of Alberta are. I prefer to take a motorcycle on road trips. It is more fun that way. My tank holds just over three Imperial gallons and at the very least I can expect to get one hundred seventy miles from a tank of gas.

I am on a Facebook forum and I posted one thread where I said that I always carry spare gas with me if I am heading out to some rural area. Usually it is a one gallon container, sometimes that and a couple of one litre fuel bottles. People seem to think I should be able to stop for gas whenever I need it and that gas stations are readily available. Guess again. If you are heading out from the Calgary area east towards Saskatchewan there may not be a lot of civilization depending what route you take.

The following map shows the southern part of Alberta and where gas stations are. 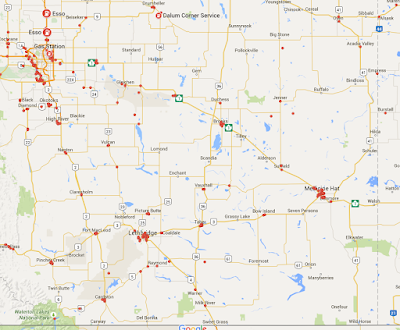 Some of the information is wrong, there are gas stations listed on this map where they do not exist. Some rural gas stations close early. Some are not gas stations at all. In Empress, Alberta the combination art gallery/convenience store/diner sells some gas on the side. For example, this summer I took my motorcycle from Medicine Hat to Manyberries then along Highway 61 to Lethbridge. This is about one humdred and fifty miles and there are no gas stations along the way. Throw in a couple of trips on some side roads  to check out some sites and you will find the miles add up. The southeastern corner of Alberta is very empty and there are not a lot of amenities.

I actually got in a few semi-heated discussions on some forums until it dawned on me that they likely just did not understand. Even though Alberta has over four million people there are lots of places that you can drive for miles and not see another person. It can be sparse out there.