Moravians? Who were the Moravians?

Interesting what you find. I found a Moravian church on August 29, 2015. A little research yields the information that they are one of the oldest Protestant denominations in the world. They were also big on missionary work.

The Moravian church began in Bohemia and Moravia in the 15th century, based on the teaching of John Hus. Moravian settlement in Alberta dates from 1895, when congregationists were first established at Bruderheim and Bruderfield (now Millwoods) and later at Heinital and Calgary. As these settlements expanded, a site for a new community became necessary. Reverend Clement Hoyler found suitable land near Hay Lakes, and in the spring of 1904 the first thirty homesteaders settled on a block of 5,000 acres.

The community was originally named Sarepta after a Moravian settlement in Russia, but when a post office was established in 1904/1905 the name was changed to New Sarepta to distinguish it from the hamlet of Sarepta in Ontario.

By 1918 the growing settlement decided to construct a new church designed by Reverend Hoyler in Carpenter Gothic Style. The Moravian church at New Sarepta has retained its original appearance and is a visible reminder of the missionary efforts of Reverend Hoyler and the transference of European religious traditions to Canada through the bloc settlement process." 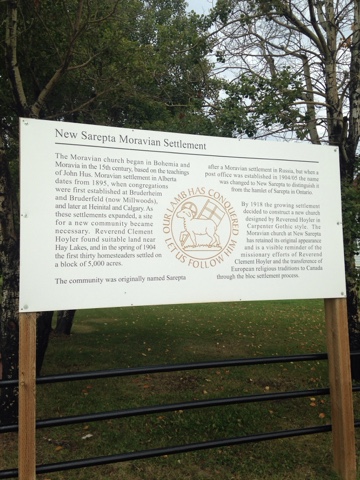 Unfortunately it is no longer a Moravian church. It has been taken over by some religious group of some kind. I would have liked to take a look inside as I am not familiar with the Moravians. A couple of people were working the grounds and they were not very friendly when I asked if I could see the inside.

As for the Moravians, a quick search of the internet shows they currently number about 750,000 worldwide and it looks like they have less than ten congregations left in Alberta. 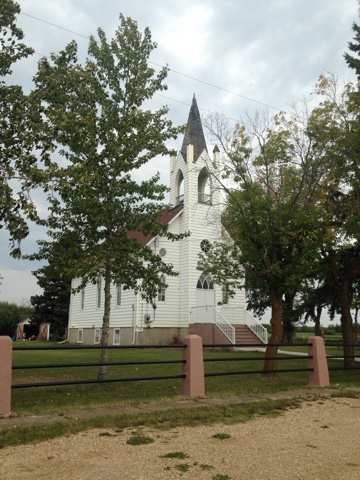 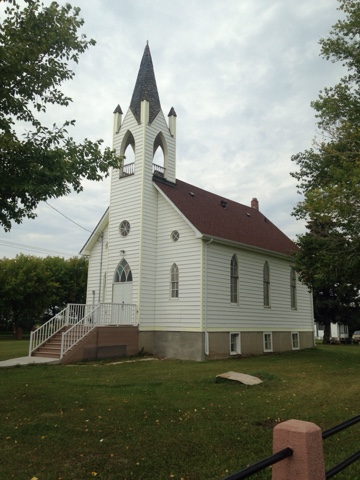