I belong to a few online groups where people look for abandoned places or historical spots. There are times I get asked for locations, the same requests are made for some people I know who's interests overlap mine. I am wary of giving out any locations as rural Alberta has been experiencing a crime wave of mainly property theft. Our laws are not really working and with people getting fed up I am sure there will be some cases of vigilante justice.

Another reason is that some people that ask for locations need to have some kind of credibility. On the forums that I belong to that are regulars that post photos. If one of them asks me about a spot I usually have no problem giving the information. If someone contacts me and has not posted anything I usually do not give out anything. There are a few people that just want some stuff handed to them.

If you want to explore and take photos then go out and do it. Some drives are fruitless, some are not. Look county maps. A lot of them list old and new cemeteries as well as other features. If there was once a church there might be something else nearby. I also look through Google Earth and Bing aerial view. Sometimes you see old buildings or other features that stand out. This church marker is at 50.222942, -113.255813 (just type this "50.222942, -113.255813" into Google or Bing maps and it will show you the location). I only found it because I was trying to get to 50.215391, -113.254226 which looked like a cemetery that I found on Bing. I tried driving out to the cemetery on November 5, 2017. There was enough snow that drifted in places where I decided against driving on that particular road that ran alongside it. I ran across the church marker on the way. The two go together. I have nothing against posting these locations as there is really nothing there. My point is there are ways of looking for things and you may or may not find something interesting when you to to check it out. I found this by doing some searching when I had a few minutes.

By the way, taking photos of rural places can look suspicious to people. I was stopped at the side of a secondary road yesterday thinking of taking a photo of a building when a farmer pulled up in a pickup. I explained what I was doing and handed him a business card so he could check out who I am if he wanted to verify my identity later. He and I chatted a bit about rural crime and he told me to be careful as landowners are getting jumpy with recent crime. 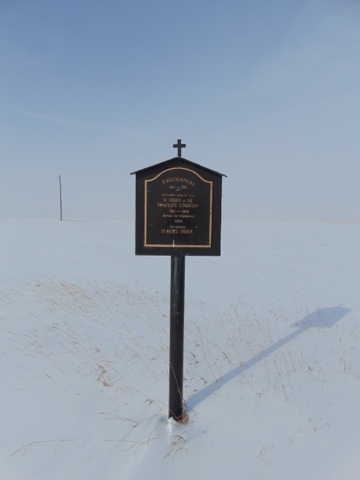 Here you can see there are not any trees. In this part of Alberta there are not a lot of abandoned buildings. Spots frequently got moved or re-purposed fairly quickly years ago. 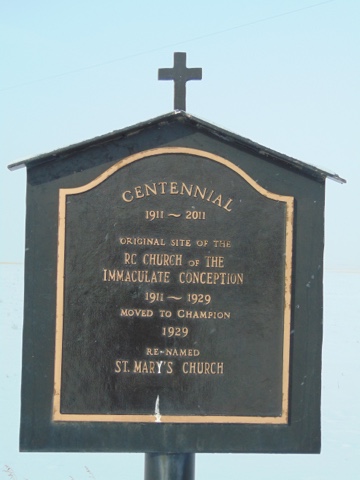