The following information is taken from Doug Barnett's Early Surveys and Settlements in Central Alberta.

"The Dominion Land Survey System first established controlling lines on which to base the township surveys. It was decided to layout the System on an astronomic basis, that is "square with the world", with north-south and east-west lines following lines of latitude and longitude on the earth's surface. Starting near Winnipeg, Dominion Land Surveyors established six meridians over a period of time. A meridian is an astronomic north-south line on the earth's surface. The Principal Meridian was followed by successive Initial Meridians (the Second, Third, Fourth, Fifth, and Sixth), each about four degrees of longitude apart. The Fourth Initial Meridian later became the Alberta - Saskatchewan boundary, and the Western Provinces were extended northward from the 49th parallel (international boundary) to the 60th parallel, a distance of about 760 miles. As meridians follow the spherical curve of the earth, they converge as they are produced northward, therefore not parallel. For example, the distance between the Fourth and Fifth Meridians along the 49th parallel is about 182 miles (293 kilometres); at the 60th parallel, the distance between the same two Initial meridians is reduced to about 139 miles (224 kilometres) due to convergence of the meridians. 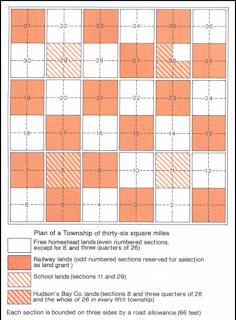 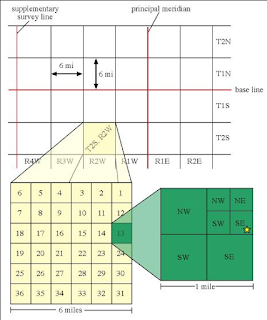 Land between the Initial Meridians was then subdivided into townships. A township is a square tract of land about six miles (9.7 kilometres) on a side, containing thirty-six sections (Figure to left.). Townships are numbered northward, starting from township one at the 49th parallel and increasing to township 126 at the 60th parallel (the north boundary of British Columbia, Alberta, Saskatchewan, and Manitoba). A column of townships in the north-south direction is called a range. Townships lie in ranges numbered westward from each Initial Meridian, starting with range one adjoining the west side of each such meridian. There are thirty ranges between the Fourth and Fifth meridians along the 49th parallel, but due to convergence of the meridians, this reduces to only about twenty-three ranges along the north boundary of Alberta. Townships are laid off their prescribed width along base lines running between the Initial Meridians. A base line is a line approximating a latitude circle from which townships are projected north and south to the correction lines (to be defined later). Base lines are four townships apart. The international boundary is the first base line; the second base line lies between townships four and five; the third base line between townships eight and nine; and so on northerly in regular order.

Township surveys subdivided the Crown land into parcels which could be sold for settlement, development and other public purposes. Sections are sometimes broken down into smaller units called legal subdivisions of 40 acres each; each section contains 16 legal subdivisions as shown in figure above to the right."

I posted this because when you are looking up stuff in older sources you frequently have places referred to something like this: NE 28-55-4-W4, which should translate to the NE Section 28 Township 55 Range 4 west of the 4th Meridian. There is an online book of old schoolhouses and it refers to them by legal land description. I did not grow up with this system, I grew up in British Columbia which has a different system so this provides a bit of a challenge for me when tracking stuff down. If you are a farmer or work in oil and gas this is stuff is second nature. The survey is also kind of why you find old schools and churches in the middle of nowhere. Land was set aside for schools and sometimes it was donated by homesteaders for schools and churches. Land titles in Alberta are a mix of Imperial and Metric and sometimes some odd measurements and terms.
Posted by BWBandy at 13:00:00