The windows may be broken, and the northwest wall partially collapsed, but this stone school still retains the aura of a building once considered too fine to serve a one-room schoolhouse.

Three local farmers helped the stonemason build the school, which opened in October 1912 to serve grades one to eight. Soon the school began to be used for other community activities; Christmas concerts, Oyster dinners, picnics, meetings, dances, box socials . . . the last school year was 1959.

I am unsure how much longer it was used as a community centre after the closing. Located in southwest Saskatchewan, visited in September, 2017. 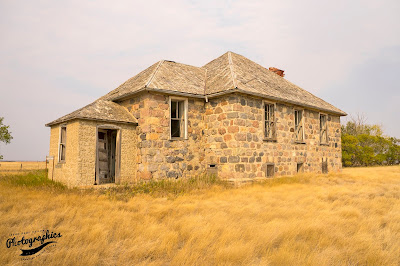