An American pastor by the name of T.L. Rosholt from Opheim, Montana organized an congregation in 1913 of local Admiral area residents. Enough interest from the locals actually created two different groups of parishioners (North Immanuel with forty parishioners and South Immanuel with thirty-four parishioners) – partially to an influx of Norwegian settlers into the region. Church services were held in resident homes, or the local one room schoolhouse. In most cases, Norwegian speaking services were held in the morning and English speaking services in the afternoon.


Money was raised and a basement for the North Immanuel church was built in 1922. Additional fundraising in the years following raised enough so the actual church could be built in 1926. South Immanuel fundraised as well and built a new church in the spring of 1933. In July 1964 the South Immanuel church was struck by lighting and burnt down. A closed church from nearby Instow, Saskatchewan was moved onto the property. In 1966 dwindling church attendance at both churches led to the decision that North Immanuel be dissolved and that both congregations merge to form Immanuel Lutheran church and to have services in Admiral.

A Google search shows the church popping up occasionally over the years since, and still being affiliated with the Lutheran church. Some records indicate the church finally closed its doors in 2007 (as the church isn’t listed on the current Lutheran church webpage). Regardless it looks in good shape, so it may be owned by someone else. 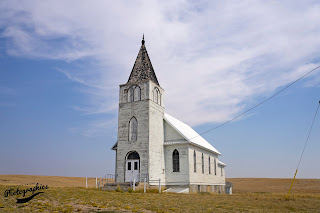