On the way west along the CP Taber Subdivision is a big brown building - approx 400' long built with reinforced concrete, with some walls up to twelve inches thick. The building was constructed in 1913 and is all that remains of the Canada Cement Company factory and the company town of Dauntless.

The Canadian Cement Company purchased 130 acres adjacent to the railway track in 1912 to build a cement factory and to have a town surveyed out to the north of the factory with one hundred lots. Approximately seven hundred men were employed to build the factory which included teams of horses to haul sand / gravel in from Seven Persons from the west. The first building to be built was the machine shop / warehouse / office building and the CPR brought the cement machinery to the site on the train. Water was to be piped in from Medicine Hat and gas was drilled on the property for the factory and the residential houses. Their was several houses built; two storey models with cement basements and heated with natural gas and included running water.

Production of cement began just before the start of the First World War - however, the start of the war closed several factories in the area as lots of men and resources were needed for the war effort. Further construction was halted and the machinery was mothballed. Discussion of war work for the property was evaluated, but nothing came from it. Slowly the residents moved from the town and the post office closed in the fall of 1917. By the early 1920s the vast land tracts were sold off and the machinery was removed from the site - some went to the City of Medicine Hat, others went to other locations. By the early 1930's the larger pieces of machinery was cut up for scrap and the railway spur was removed. A local farmer purchased the building and used it for wheat storage / potato storage. It was sold in the late 1970s to a local company to store oilfield pipe. 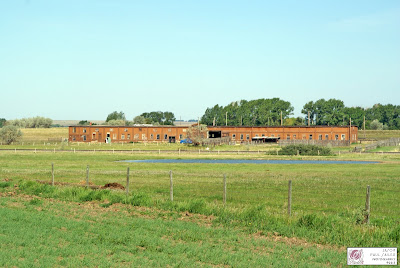