Vernon, British Columbia to Leduc, Alberta. A distance of five hundred miles via Highway 97A to Highway 1 to Highway 93 north at Lake Louise to Highway 11 east to Highway 2 north home.

Another hot day. Roads were fine. I stopped at Malakwa for gas and a guy getting gas who was westbound told me that two gas stations in Revelstoke were out of gas. This would not surprise me, it is a busy place in summer and a lot of traffic stops there. Revelstoke was where I has headed. The motorcycle only has a fifteen litre tank so gas stops are a little more frequent than my vehicle. When I got to Revelstoke I topped up the tank. I did not notice if any stations were out of gas.

Nice run from Revelstoke to Golden except for the smoke. There were signs saying a prescribed burn was happening. The sky was hazy with blue smoke and visibility noticeably dropped in a few spots. Signs were up saying no stopping was allowed.

Golden into the first part of the Kicking Horse Pass with a lot of road construction. The project is to make the highway from Golden through the pass all four-lane. This part of the pass the highway hugs the mountain side so the highway looks like it is being built out using supports and bridges.

Highway 93 north from Lake Louise to Jasper is one of my favourite roads. I was only going as far as Saskatchewan Crossing on this stretch before heading east. On this highway I saw a bunch of cars pulled over on the side of the road. I stopped and noticed a black rummaging around in the brush. After about twenty photos I got two decent ones when it emerged. There were some dumb tourists blocking me in their rush to get close to the bear when I tried to get off the shoulder back onto the highway. Keep a safe distance from bears, they are dangerous. 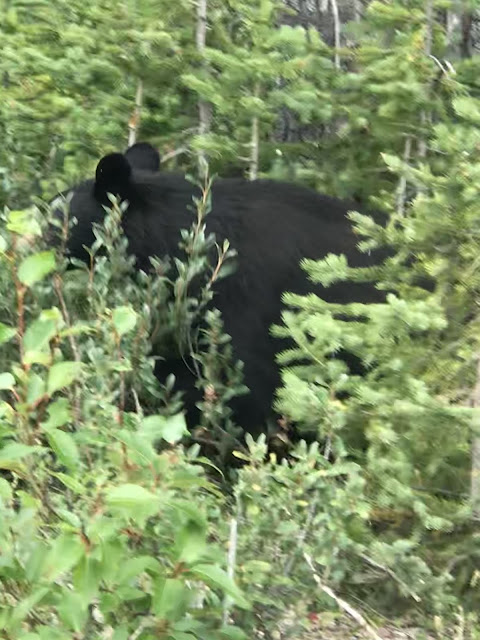 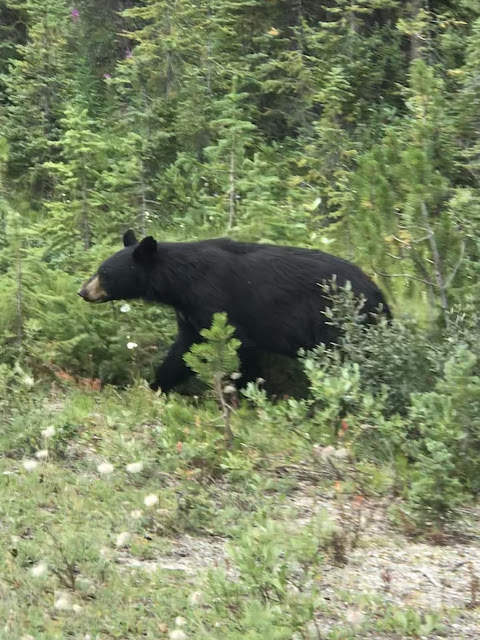 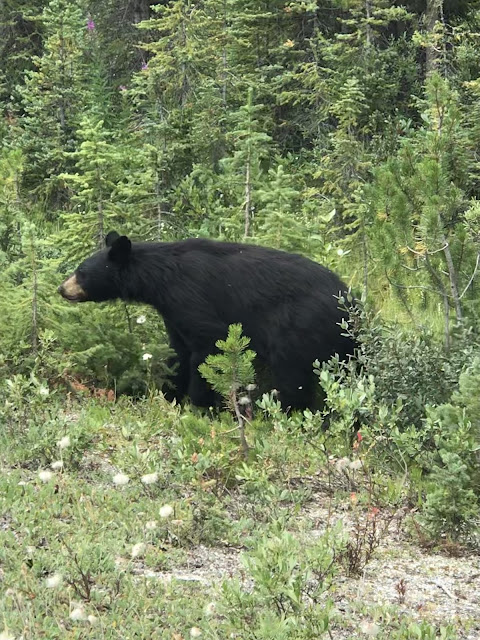 East of Nordegg I ran into light rain. Then lightning off in the distance which is not a good sign when you are on a motorcycle. Rain started falling a little more with a little more lightning.

Stopped for gas in Rocky Mountain House. I got under the canopy and before I started filling the tank a downpour hit. Then my sister called. She was with mom and asked where I was. When I answered I was asked to drive up and visit, it is only a bit over an hour. I declined. Weather to the east was clear. To go north to visit was raining and severe thunderstorm warnings. I hung out by the gas pumps while the rain subsided and made a relatively dry trip home.