Not my car in the ditch. I was on my way to the conference that I was supposed to attend which is about fifty miles from where I live. A snowstorm hit started yesterday afternoon and continued on into today. This morning side roads were drifted in. Side streets had single lanes plowed. I started out driving on the highway with lots of time to spare to get to my destination. The highway was extremely icy in spots and I stopped counting cars in the ditch when I got to twenty. I had to drive through a one and a half foot drift on an interchange and decided that was enough. After about a third of the way there I figured my presence as a participant was not needed that badly and headed back.


I had new snow tires installed back in November before winter hit. I was driving well under the speed limit due to the ice and snow. If I tried to speed up I could feel the car start to slide and the wind was only polishing the road surface even more. Of course there are the usual people out on the roads that should not be allowed to drive. I observed one person pulled over by the RCMP and being ticketed. He was driving a minivan and only bothered to clear snow from his windshield and driver's side window. All the rest of the windows were covered with about two inches of snow. Hopefully they charged him with everything applicable. There are days I feel for the police having to go out in weather like this and deal with stupidity. 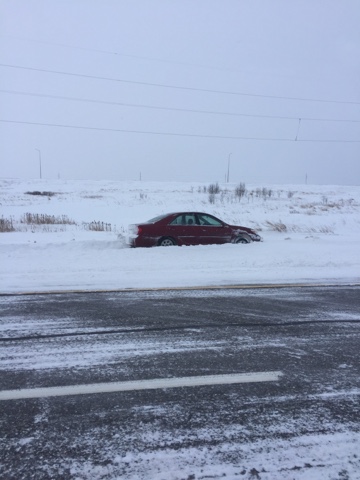