Saturday was spent in Oyen, Alberta being shown some of the sights by someone who has lived in the area all his life. I had met him once in person a few years ago. We have corresponded off and on about local history. What brought us together recently was a bit of a grave mystery. On a hunting forum I read in some parts of Alberta there are a few solitary graves out that hunters run across in the middle of nowhere. One grave they specifically mentioned in the forum and had a photo of was for Cecil P. Heffernan. The dates on his headstone were 1902 - 1915. The exact location was not mentioned. The people on the forum wondered what happened to Cecil. I was curious as well.

This is the photo that someone posted on the hunting forum. 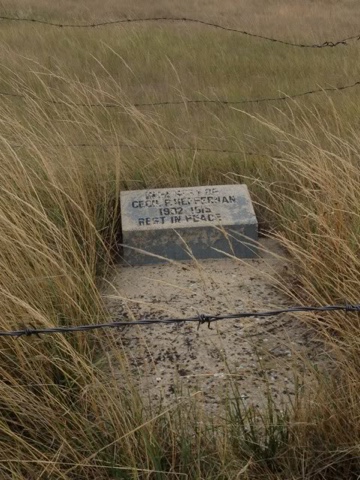 I contacted my friend in Oyen. I was pretty sure the grave was not in his area but in an area he knew. I took a chance he might know something or know someone who may know. He did not know about it but he was intrigued. He did make some enquiries and within a few days he found out where the location was and the exact fate that befell Cecil. We had also discussed some old schools in the area that I had seen before and he said there were a few places that I missed that he could show me. I mentioned I would like to drop out to Oyen and meet up. We picked a date. A heavy hint was dropped that a bottle of Canadian twelve year old rye whisky would help matters immensely. I tracked down that particular request before heading out. I thought it was a fair price, or bribe, to pay for someone willing to be a tour guide for a large chunk of the day. Since a few old one room schools were on the agenda I invited a friend of mine along who loves that sort of thing. I might as well get my money's worth.

He showed us some very interesting places in the area. One of them is this lonely grave sitting in a field. This person died in a windstorm, possibly a tornado, in 1918. This is not far from Oyen. It is a little fenced enclosure with a simple cross in a farmer's field. Life as a settler years ago could be precarious. 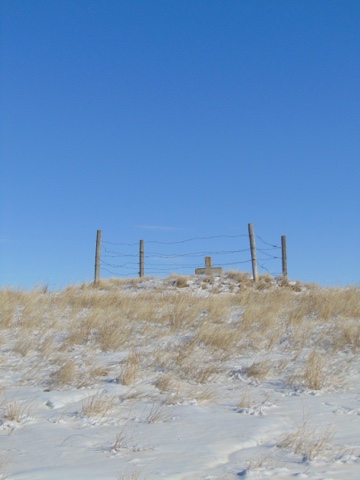 Cecil P. Heffernan will be a story for another time. I did not get to see his resting place nor find out where it is. I do know his story. My host knows where it is and has not been there yet. I am sure that he wants to see it first. He does not have a blog but he does post photos in forums about Alberta history. I had previously told him he should post this tale somewhere. He did the work so he should reap the benefits, it is only right. I can wait.
Posted by BWBandy at 08:30:00