Known as the "T-Bird", the Lockheed T-33 started life in 1944 as America's first operational jet fighter, the Lockheed F-80 Shooting Star. In 1948 a second cockpit was added to create the world's first jet trainer: The T-33.

Canada entered the jet age at this time (the Avro CF-100 Canuck prototype was being built) and was, therefore, looking for its own jet trainer. Canadair of Cartierville, Quebec won the contract to build the RCAF version of the T-33, and the first "CT-133 Silver Star" rolled out in 1953. Over 650 were built and distributed to bases all over Canada. Surprisingly, the T-33 was a better performer than the original F-80 Shooting Star. In addition, the CT-133 Silver Star with its Canadian-built Rolls-Royce Nene engine was 50 mph faster than the American version.

Though replaced as Canada's advanced jet trainer by the Canadair CL-41 Tutor in 1963, the CT-133 continued service in radio, electronic warfare, reconnaissance and navigation training roles until officially retired in 1995. In fact, two Silver Stars remained in service with the Engineering Test Establishment at Cold Lake, Alberta, until July 2005, making the CT-133 the longest-serving aircraft in the Canadian Forces. It has over 50 years of service and 2.4 million flight hours.

This particular T-33 was mounted on a pylon in a park across from the County of Warner offices in Warner, Alberta in 2003. From what I was able to research online, its actual serial number is #133419, though there is a 110 number stencilled on the side of the aircraft (I am assuming to indicate its original number, as the original serial number was 21110). A group of locals from Warner contacted the Nanton Lancaster Society looking for a donor aircraft to display, and the Society had this T-33 in storage that was made available to the Warner group, who reassembled it and mounted it on the pylon. 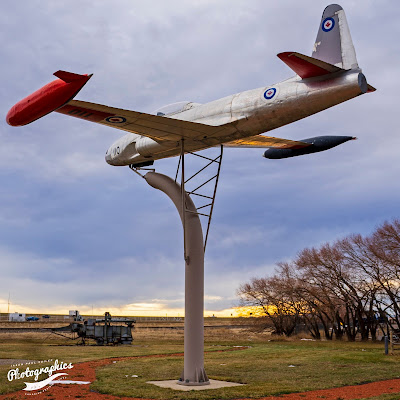 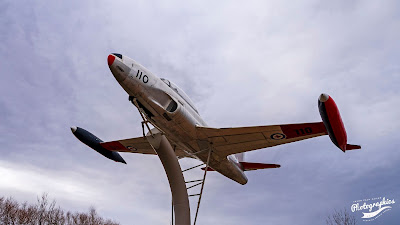