Grain elevator fans are everywhere and I find myself corresponding with readers about them. Debra from shewhoseeks.blogspot.com sent this:

It took me awhile to locate this photo, but I finally found it among my Dad's memorabilia. I'm not sure when it was taken (it would have been sometime in the 20th century -- late 1960s perhaps?) and of course was photographed on film, without the possibility of today's high resolution. But for what it's worth, here it is.

There's one online link about the Hathaway elevator here:

This info, however, gives the erroneous impression that there was a "community" called Hathaway, when there was not. It was only ever just a railway siding. The homesteader Mary Hathaway referred to in the link was my great-grandmother. Bruce Hathaway, also mentioned, was one of her sons (my grandfather's brother).

Along with the photo, I found this newspaper clipping: Cecile McMurray, "Hathaway buildings remembered" (The Brandon Sun, Sept. 4, 1998) p. 2 or 4 (unclear which). The most relevant, verbatim quotations from that article --

"Hathaway Siding was honoured on Aug. 29 when a cairn was dedicated to the Hathaway Curling Rink, Hathaway elevator and the Coxworth School.

These three buildings at one time could have been found on section N 29-4-22. By following the Regent-Dand-Croll road west from Highway 10, the elevator can be seen.

Earl Manz, one of the three secretaries for the Hathaway Co-operative Elevator Association, spoke about when the elevator was established in 1928 and of the purchase of the elevator from N. M. Paterson. The elevator became known as Hathaway Pool Elevator and in the recent years has been bought by Hammonds. 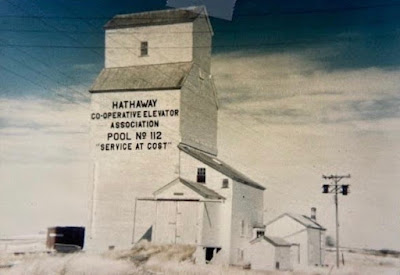