Well I tried to get out. The day ultimately ended up being successful enough.

On the road a bit after seven Saturday morning. The highway was shrouded in fog when I started out for about the first hour. A few times I had to slow down to about thirty miles an hour due to the limited visibility. It was much easier when the sun came up.

A few hours later I ran into light rain and light snow. Thankfully it was not freezing rain. Further down the highway I came across an older couple parked at the opposite side of the road with their hazard lights on. I turned around and asked if they needed help. Their fairly new Ford F250 was running like it was fighting for its last gasps of life. While talking to them they shut off their vehicle, turned the key a minute later, it roared to life and sounded perfect. They thanked me for stopping and went on their way.

Later in the day about three and a half hours from home in very rural Saskatchewan my KIA after stopping for a photo started making an unholy squealing from the rear passenger wheel. I had never heard that kind of noise before and I was concerned I had some horrible mechanical issue that I had to deal with. I got to Provost, Alberta and wheeled into a tire shop. The guy on duty determined I picked up a rock in my brakes and got it out for me. I have had a vehicle pick up a rock before, I have never had one produce a sound like that. At that point after fog, snow, rain, overcast skies, the cloud cover disappeared and the prairie sky was nothing but glorious sunshine.

Time to head back. After a stop along the way for baby back ribs and beer of course. I felt I deserved it. 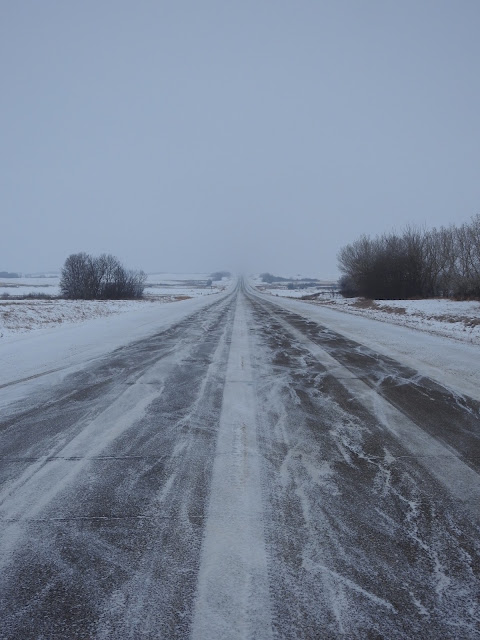