I saw this Rocky Mountain House, Alberta on Boxing Day. 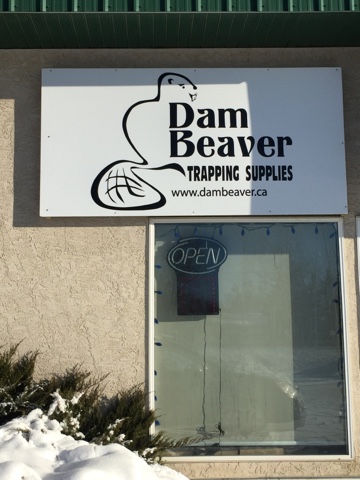 This is the first store dedicated to trapping I have seen. If they were open I would have walked in. I have seen a fair amount of beaver in the wild and they can be a problem. I have seen muliple dams on the same creek leaving me wonder how many generations of beaver there were in that area. When I was a kid one of my uncles used to work for the county and one of the jobs they would do was breaking up beaver dams, trapping, and relocating them. Beavers are very industrious and their actions would divert water from culverts or block them and flood roads.

Another uncle of mine had a farm near Tomahawk, Alberta. There were a number of beaver that were flooding part of his farmland. I was not yet in my teens and I was out on the farm one summer. I liked visiting him. He let me learn to drive on a 1942 Willys army jeep with questionable brakes that he had on the farm and I got to play chauffeur driving him around the farm for the week I was there. There was a two man crew on his land doing some work for an oil company. It was a hot summer day and we drove across the field and hailed them. My uncle heard they had dynamite and asked if they wanted to take a break from what they were doing and if they wanted to blow up a beaver dam. They had no problem accepting the invitation.

Everyone piled in the jeep and off we went. I watched the one guy walk across the dam, take a pry bar to open up a gap, and insert the explosive. Wires were unrolled as we all got a safe distance away. Then I got to see one of the most awesome sights when I was a kid, a beaver dam exploding into pieces and the water rushing out. My uncle was a happy guy.

My uncle was also not a great farmer. He worked hard at it and did the things you were supposed to do. The problem was he never really enjoyed farming. His heart was never in it. He could not bring himself to kill anything. The beaver were left alone and overnight they rebuilt the dam. If you are going to get rid of the dam you also have to get rid of the beaver. Maybe he secretly liked having them there. Not too many years later he died of a massive heart attack nailing shingles on a cattle shed. His son took over and still has the farm today. He also solved the beaver problem.

Strange how things remind you of other things.
Posted by BWBandy at 14:00:00